Running Proxmox VE 5.4 and want to wake your cluster nodes through the web interface? You can now set a WOL MAC address for all nodes using the pvenode command. On each node in your environment, issue the following command from the terminal:

Replace the XX’s with the MAC address of the NIC that will be accepting WOL packets for that node. Now you can wake any Proxmox nodes that you’ve configured without having to leave the web interface. Simply right click the node name and choose Wake-on-LAN. 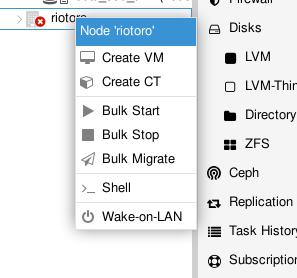 Proxmox will then confirm a successful WOL send, noting the host name and MAC address, and the node will come online in the web interface shortly after.

Earlier this year I made the jump to Proxmox 6.2, which went very well on both of my servers, but I found that Wake-On-Lan no longer functioned like it did in PVE 5.4. It was possible to set the WoL flag on my NIC after first boot, which would persist after shutdown. Once I woke the machine over the LAN the WoL flag would be reset and if I did not run the command again before the next shutdown I’d have to run switch the server on manually.

After a little forum searching I found that this had been an issue in the earlier PVE 2.x days. Apparently the change this time was made in Debian Buster (which PVE 6.2 is based on) and I needed an automatic way to switch that WoL flag on reliably.

To accomplish this and get WoL back like it was, I ran the following:

This allows you to edit the cron settings. Once open for editing, add @reboot /sbin/ethtool -s eth0 wol g. Once added, the server will reapply the WoL flag (the ‘g’ in this cron statement) on each reboot.

Your NIC may not be eth0 so make sure you are applying this to the correct adapter on your machine, and that you have run the pvenode command shown above.